Even though we are all still recovering from the election (and there are still some pending legal challenges to consider), we thought we’d take a few minutes to unpack an idea that many people have floated on social media and opinion columns.

Here’s one example, from Thomas Knapp, the director of the the Garrison Center, writing at Counterpunch:

Headline: America in Transition: Two Things Donald Trump Can Do to Burnish His Legacy

Trump has the power to pardon. He should use that power in unprecedented fashion, emptying the federal prisons of non-violent drug offenders and other assorted victims of a “justice” system gone haywire.

Assange and Snowden have been charged, but not yet tried, with telling the American people the truth about their government’s crimes. Manning has been convicted for the same heroic acts. President Obama commuted her sentence, but it’s time to restore her rights and recognize her service to her country.

Knapp isn’t the only one floating the possibility of a pardon for Assange. So let’s break down why this might be a great idea for Assange, for Trump, and for America.

1. It Would Transform Trump into the Defender of American Values

Presidents rarely get to define their own legacy, and are often victims of external circumstances. Trump would love for his legacy to be about economic growth and reworked trade deals, but that’s unlikely to be how history remembers him. He has his tax cuts, and his defenders will make claims about economic strength…that was ultimately derailed by the COVID pandemic.

But there’s the rub. You can’t summarize the Trump presidency without fixating on COVID. The next sentence would probably be something about the divisiveness of the cultural and political moment. Much of that is beyond Trump’s control, but tell that to Herbert Hoover and Lyndon Johnson. Those are the breaks.

If Trump wants to shake up the narrative on his presidency, he can use one of his most important powers to do so. Pardoning Assange, Snowden, Manning, or a combination of the three would drastically reshape Trump’s legacy. It would become impossible to spin a narrative about Trump and our political climate without noting his magnanimous gesture. The speech almost writes itself: 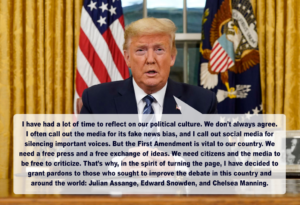 We can’t be sure what Joe Biden will do as president when it comes to Assange. Maybe he’s weighing a pardon himself. Maybe he’ll merely drop the extradition request. Maybe he’ll actually continue the prosecution.

Whatever Biden’s hypothetical course of action, a Trump pardon takes the decision out of Biden’s hands and gets Trump all the credit.

Biden has a lot of work cut out for him uniting the Democratic Party and its coalition. They won’t have Trump to kick around any more, and the Left will be keeping a close eye on Biden. Taking Assange (and others) out of play gives Biden one less move he can make to appease key parts of his base.

3. It makes things more difficult for the Biden administration.

Similar to our last point, sending a powerful message in support of press freedom and releasing Assange causes headaches for the incoming president. Remember: Assange, Manning, and Snowden are all charged with crimes committed during the Obama-Biden administration. Allowing these transparency advocates the freedom to speak truth to power is a great way to undermine those in power.

4. It strikes at the Deep State.

Whatever your thoughts on Trump, let’s get one thing out of the way: the Deep State is real. Maybe you’d rather not call it that, and prefer “the national security establishment,” the “military-industrial complex,” or just “the bureaucracy.” Regardless of the label, there are career bureaucrats who transcend political parties and seek to accumulate power. They hate people like Assange, who operate outside established institutions. And Trump (usually) hates them back. What do they say about “the enemy of my enemy?”

The more “establishment” types prefer the predictability of someone like Joe Biden over the likes of Trump, who they feel less capable of controlling. It’s one of the reasons (although not the only one) that many establishment Republicans and hawkish (neoconservative) figures were “Never Trumpers,” “Lincoln Project” supporters, or even supported Joe Biden. Trump can tell them off by pardoning Assange and others.

Call it “saving the best for last.” Or chalk it up to cynicism about politics. But we can’t write a list like this without pointing out that the persecution of journalists and whistleblowers is simply wrong, and any action that pushes back against that persecution is a positive move.

Assange is not a U.S. citizen. He is being literally charged with “Espionage” for activities undertaken while he was in Europe. And even if you object to him being characterized as a “journalist,” the activities he is being charged over are textbook journalistic activities: newsgathering, working with sources, and publishing. Assange might not have operated like an old-school journalist, but that’s because he’s part of the evolution of journalism that is more open-source and accessible. Countless journalists, scholars, human rights organizations, and legal groups have all condemned the prosecution of Assange because it strikes at the heart of the free press and would make reporters all over the world subject to government persecution simply for doing their jobs: trying to tell the public the truth about things they have a right to know.