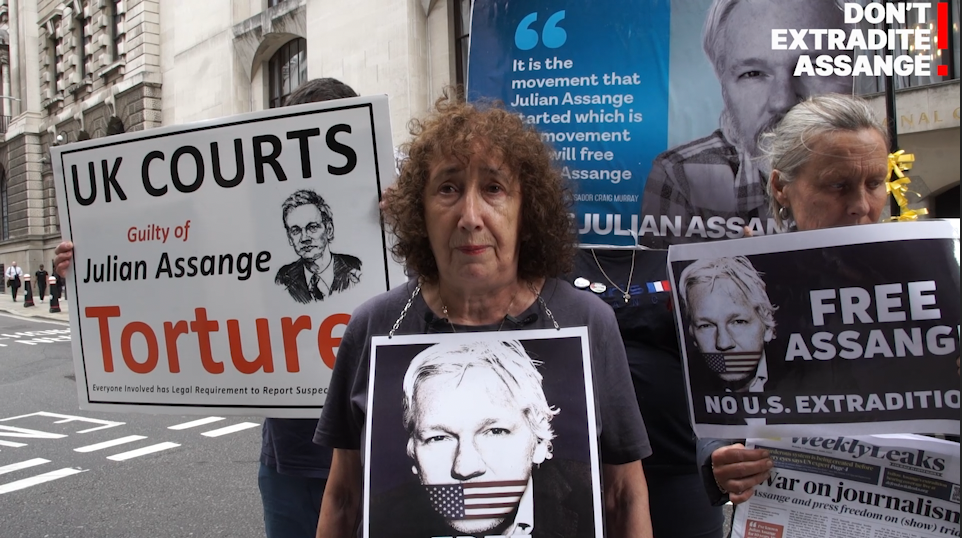 Paul Rogers, Emeritus Professor of Peace Studies at Bradford University, took the stand by video link to testify about Julian Assange’s political views and how they factor into the Trump administration’s prosecution of Assange for publishing.

Rogers reviewed Assange’s speeches, including an anti-war speech in 2011 in London and a speech to the UN following the release of Iraq and Afghan war logs, as well as Mairead Maguire’s nomination of Assange for the Nobel Peace Prize in 2019. Rogers concluded that Assange’s views don’t fall into traditional liberal or conservative belief systems but are rather more libertarian, anti-war, and based on values of transparency and accountability.

On the stand, Rogers talked about how WikiLeaks put these values into practice with the war logs publications, and he contextualized the releases with changing opinions in America regarding the wars in Iraq and Afghanistan:

“Possibly the most important part of the whole thing,” he said, was that WikiLeaks’ releases showed 15,000 previously uncounted civilian casualties, “bringing to the American public a very disturbing aspect of the whole war.”

As Rogers puts it in his statement,

The political objective of seeking to achieve greater transparency in the workings of governments is clearly both the motivation and the modus operandi for the work of Mr Assange and the organisation WikiLeaks. Its manifestation, as is set out in the study by Professor Benkler, has constituted a wholesale alteration of accessing and making available for public information, the secrets that governments wish to remain unknown to their general populations. The subject matter of the charges Mr Assange currently faces involve strong examples of the clash of these positions both in their content and scope, and in the reaction of government.

It is clear that Assange is being opposed because of the success of WikiLeaks in bringing information to the public, he said. This is dangerous to the Trump administration: “the root of it is that Assange and what he stands for represents a threat to normal political endeavor.”  In addition to opposing Assange’s words and views, the fact that Obama didn’t prosecute should to some extent be considered in why Trump is prosecuting.

Prosecutor James Lewis QC sought to undermine Assange’s political views by bringing up his views on corporations and NGOs, but Rogers explained that “political opinion” isn’t just about government leaders, that the definition of political opinion has changed significantly in the last 50 years, and that Assange has a view on “transnational elites.”

Lewis further sought to portray Rogers as biased toward Assange and the defense. He asked why Rogers didn’t include in his statement, in which he referenced views of other experts like Noam Chomsky and Carey Shenkman, the views of assistant U.S. attorney Gordon Kromberg, which defended the prosecution of Assange as a criminal matter, not a political one.

Rogers responded that he takes it as read that federal prosecutors at the lower level act in good faith, that they do as they’re instructed in accordance with the law, but that the wider political context — namely that the Obama administration didn’t prosecute and the Trump admin did, and the Trump administration represents a marked shift in the U.S. political situation — far outweighs the statements of a U.S. attorney.

The prosecution then suggested that the Obama administration may not have prosecuted Assange because he was in the Ecuadorian Embassy at the time:

Lewis: Was it possible to arrest Mr Assange in 2013?

Rogers: Is it necessary to be able to arrest someone to bring a prosecution?

Lewis: What would be the point if he’s hiding in the embassy?

Rogers: Well, to put pressure on him. It would have made very good sense to bring it at that time, to show a standing attempt to bring Mr Assange to justice.

Lewis reviewed the same items as he did with Feldstein yesterday, including WikiLeaks’ lawyer and editor suggesting they still believed charges were possible, but again and again Rogers brought the discussion back to the wider context, and the fact that the Trump administration’s views more broadly have to be considered. Statements by then-CIA director Mike Pompeo, then-Attorney General Jeff Sessions and others have to be part of the determination. Rogers also referenced Obama’s commutation of Chelsea Manning’s sentence. The Trump administration wasn’t happy about that, but a commutation can’t be reversed by a subsequent administration, so this could be Trump’s way of responding to that.

Rogers hammered home that by calling this a “politically motivated prosecution,” he isn’t saying that lower-level federal prosecutors are acting in bad faith. Rather, he said, the influence comes from the top down.

Court is in recess for lunch. Trevor Timm of the Freedom of the Press Foundation will testify after the break.

Trevor Timm: These charges would ‘radically rewrite’ the First Amendment

Founder of the Freedom of the Press Foundation, which advocates for reporters’ rights and tracks violations to press freedom across the United States, Trevor Timm took the stand by videolink this afternoon to talk about the dangers the indictment against Assange poses to journalists and their sources.

Timm objects to the indictment on the grounds that it threatens to criminalize source protection and the passive receipt of government documents as well as pure publication. He concluded that “It would be a radical rewrite of the First Amendment if the government were to go forward with these charges.”

As Timm writes in his statement,

“The decision to indict Julian Assange on allegations of a “conspiracy” between a publisher and his source or potential sources, and for the publication of truthful information, encroaches on fundamental press freedoms.”

Freedom of the Press Foundation has helped many news organizations adopt SecureDrop, an anonymous and secure submission system for sources to safely send documents to journalists undetected. While a largely unused practice when WikiLeaks pioneered it before 2010, major news outlets around the world make use of SecureDrop, and some of them explicitly ask for leaks of government documents.

The way this indictment is written, particularly the charge alleging Assange engaged in a conspiracy with source Chelsea Manning to crack a military computer password in order to remain anonymous, would make this extremely common news gathering illegal. “I don’t think it’s an exaggeration to say this indictment would criminalize national security journalism.”

“Material journalists often write about and print do not magically land on their desks,” he said. They talk to sources, ask for clarification, ask for more information. “This is standard practice for journalists.”

“This is almost a consensus opinion among press freedom groups and media lawyers who have looked at this indictment. This is why newspapers, even those who have criticized Mr Assange, have condemned this indictment.”

Beyond the effort to criminalize source-protection and newsgathering, Timm is extremely concerned about the other charges in the Assange indictment under the Espionage Act of 1917. Some charges criminalize publishing and for soliciting information, and some of the charges are even broader. “Just the mere thought of obtaining these documents,” Timm said, “the US government is saying is potentially criminal.”

Timm discussed previous efforts to go after journalists under the Espionage Act, efforts that have failed under legal scrutiny.  “In each and every case,” Timm said, “the government concluded or was forced to conclude” that an Espionage Act prosecution would violate First Amendment protections, including the Obama administration’s 2013 determination not to prosecute WikiLeaks.

Each Espionage Act charge carries 10 years in prison, allows no public interest defense, and only requires the government prove harm could “possibly” have been caused by leaking or publishing.

James Lewis QC, cross-examining Timm for the prosecution, highlighted Timm’s claim in his witness statement that Trump is waging a “war on journalism.” He sought to undercut the claim by pointing out that the U.S. Department of Justice has explicitly said that they do not consider Assange to be a journalist and that they aren’t going after journalists.

Timm responded, “In the US, the First Amendment protects everyone. Whether you consider Assange a journalist doesn’t matter, he was engaging in journalistic activity.”

Lewis tried again, emphasizing that the DOJ specifically went “out of its way” to say they don’t target journalists.

“My opinions are not based on a Justice Department press release but on what is actually contained in the indictment. There are several charges that deal with the mere fact that WikiLeaks had these in their possession. You say there are three charges dealing with publication just of documents with unredacted names, but the rest of the charges deal with all of these document sets, and this criminalizes journalism.

The aspect of criminalizing publication worries me greatly, but there are many other charges that are as worrying or more so, that could criminalize journalistic practice whether you consider Mr Assange a journalist or not.”

Lewis tried to get Timm to comment on the 2011 unredacted publication of the State Department cables, but Timm made clear that whether WikiLeaks has “perfect editorial judgment” shouldn’t matter as to whether the action is illegal. Furthermore, he said, “I certainly don’t think the US Government should be the one to determine whether this was good editorial judgment.”

“Trump has the most confrontational approach to the media since Nixon,” Timm said. He referenced Trump tweeting 2,200 times about the press, including calling them the “enemy of the people.” Timm said, “This case is the perfect opportunity for him to create a precedent to punish the rest of the media.

“To me it’s very telling that Trump’s is the first one to try to bring a case like this since the Nixon administration.”