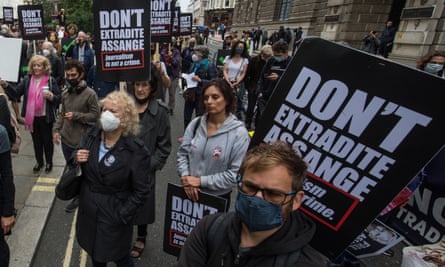 Judge Vanessa Baraitser then announced that some 40 individuals were granted remove (video) access to the proceedings by mistake, and their access has been revoked. Courage has learned that those whose access was rescinded include representatives from Amnesty International and PEN Norway.

“I know that others are attending this hearing remotely and in an adjacent courtroom. I am allowing this to take place for social distancing and technology allows us to watch this remotely. Those who attend remotely are still bound to the usual rules relevant to court hearings. I remind you that it is a criminal offense to record or broadcast any part of this hearing, including screenshots on any device. As you know I am aware that a photograph has been taken of Mr Assange inside court and shared on social media in breach of these rules.

I have received a list of 40 people who wish to attend this remotely by cloud. This is something I can consider but only after I have received an application. I have granted a number of remote access to lawyers and a small number of people including lawyers who have acted for Mr Assange in closely related proceedings. In error, the court sent out to others who had sought access. During this pandemic, there have been changes about how people can access proceedings. I remain concerned about my ability to maintain the integrity of the court if they are able to attend remotely. Normally, I can see what is happening in the court room to ensure the integrity of courtroom is maintained. Once livestreaming takes place, the court cannot manage this breach even less when the person is outside the jurisdiction. I want to make it clear that the public interest and allowing remote access is unlikely to meet the interests of justice tests. There are many jurisdictions allowing travel to the UK during COVID, so lessening restrictions on travel. For those who consider they still not travel to the UK to attend the hearing, then they need to apply again and I will consider it.

Debate over whether witness statements will be read in court

Prosecutor James Lewis QC opposes this, saying it is contrary to Divisional Court jurisprudence and that it would allow witnesses to give additional evidence beyond their written statements and require constant adjournments to allow the prosecution to consider the evidence given on the stand before cross examination can begin.

Six months after opening submissions, 18 months before this hearing started and a matter of weeks before the matter was listed, the US announced a new indictment.

“It is a curiosity that the US had, in previous hearings, been content for the hearings to go ahead in February and in May, presumably knowing that this was coming.”

It wasn’t immediately obvious what had changed. Of course the conduct outlined in it, but as far as the charges in it, it was difficult to discern what was going on….

“It became clear to everyone on 21 August, just over 2 weeks ago, whether or not we were justified in thinking the charges had changed. The material was expressly now not just background material but was being put before you as potential standalone basis for criminality, that is to say, that even if the US court rejects in their entirely the existing Manning allegations, Mr Assange can be extradited and potentially convicted for this conduct on its own and this is a resounding and new development in this case. The reason I am on my feet is of course the timing of this development.”

The defense also outlined the various other criminal allegations now included in the new indictment – including assisting a whistleblower attempting to evade arrest (Snowden).

“It would be extraordinary for this court to be beginning an extradition hearing in relation to allegations like that within weeks of their announcement without warning and even more extraordinary to do in circumstances where the defendant is in custody.”

To remedy this issue, the defense proposes the court excise the new conduct alleged in the newest indictment. “It impossible for the defense team to deal with the allegations being put to him and in relation to material for which you have been provided no explanation for their late arrival.”

“It is fundamentally unfair to introduce separate criminal allegations, without notice, without time to prepare evidence, where the defense cannot properly deal with the new aspects of the case.”

“What is happening here is abnormal, unfair, and liable to create real injustice if it is allowed to continue.”

“The appropriate course is for the court to exercise its powers to excise the new allegations.”

Judge Baraitser says the defense should have asked for more time despite Assange still being in custody. If conduct is to be excised, she says, it must be in the context of a statutory bar or abuse of process argument. The judge refuses the defense proposal to excise any new conduct in the newest superseding indictment.

In light of the judge’s refusal to excise the new conduct alleged, the defense asks the court for an adjournment until January.

“This is an application that we do not make lightly because Mr Assange will bear the brunt of the consequences of it. In light of your ruling, we do apply for an adjournment to allow us to gather the evidence that we need to answer the new allegations.”

We have not been able to answer the allegations which have only been made in the last few weeks. This has been made worse because of the conditions we are all having to work under.

“I can say without fear of contradiction that no one in this case has been involved in a case of this magnitude dealing with the gathering of evidence at this late stage of the process.”

The defense explained why they haven’t made this application before today’s hearing:

“First, throughout that period, Mr Assange had not seen the new request. I have mentioned more than once that the only way he gets to see documents is by posting documents into Belmarsh. We have not had opportunity to meet and consult with him. He still hasn’t received, for example, the revised opening note and the documents which accompanied it and it was that document that made clear that we were dealing with conduct that was mere narrative as we had believed it to be but was standalone criminality capable of sustaining a conviction if accepted in its own right. Instructions taken from Assange on that basis could only have commenced on 21 August, which was last week, and we took the view that we had the ability to first apply to exclude that material. We have recognized that the solution, if there is one, is adjournment.

I could of course appraise you with more detail of the difficulties the defence team has been operating under the past few months.”

Acknowledging that they haven’t seen their client in person, the judge asks if the defense has been able to speak to Assange by phone. They respond yes, but only twice in very short conversations:

“It is not easy and even coherent on the phone. I don’t want to belabor the difficulties we have had in communicating with our client in the past week, but they have been very significant in the time period you are concerned with. He was, in essence, over that unsatisfactory medium, he was having to take in information from us on – any view – complex documents and to make him aware of the issues and to take a decision on them.”

The defense explained there is no videolink, only these short, difficult conversations by phone. The judge adjourned for 10 minutes to consider the defense’s application.

The judge says the defense had time to apply to adjourn previously and they did not do so. Rejecting the defense’s reasoning for applying now, she says she ruled not to excise new conduct now but this can’t have come as a surprise and the defense should have acted as if we would proceed. Judge denies defense application to adjourn.

Mark Feldstein, journalism historian and professor at the University of Maryland, gives testimony.

Feldstein testifies to the ubiquity of leaks of classified information:

“There are so many of them – thousands upon thousands – it is routine; every study in the last 60 years has said the leaks of classified information inform the public about government decision making but they also evidence government dishonesty….and they go back to George Washington’s presidency.”

Some journalists make a career of this?

Feldstein says, “Yes, Pulitzer prize winners and some of the most respected journalists in the nation.”

Would you expect publishers to be prosecuted for this criminal conduct?

“Well no…because the First Amendment protects a free press and it is vital that the press expose wrongdoing….not because journalists are somehow privileged but that the public has a right to be informed.”